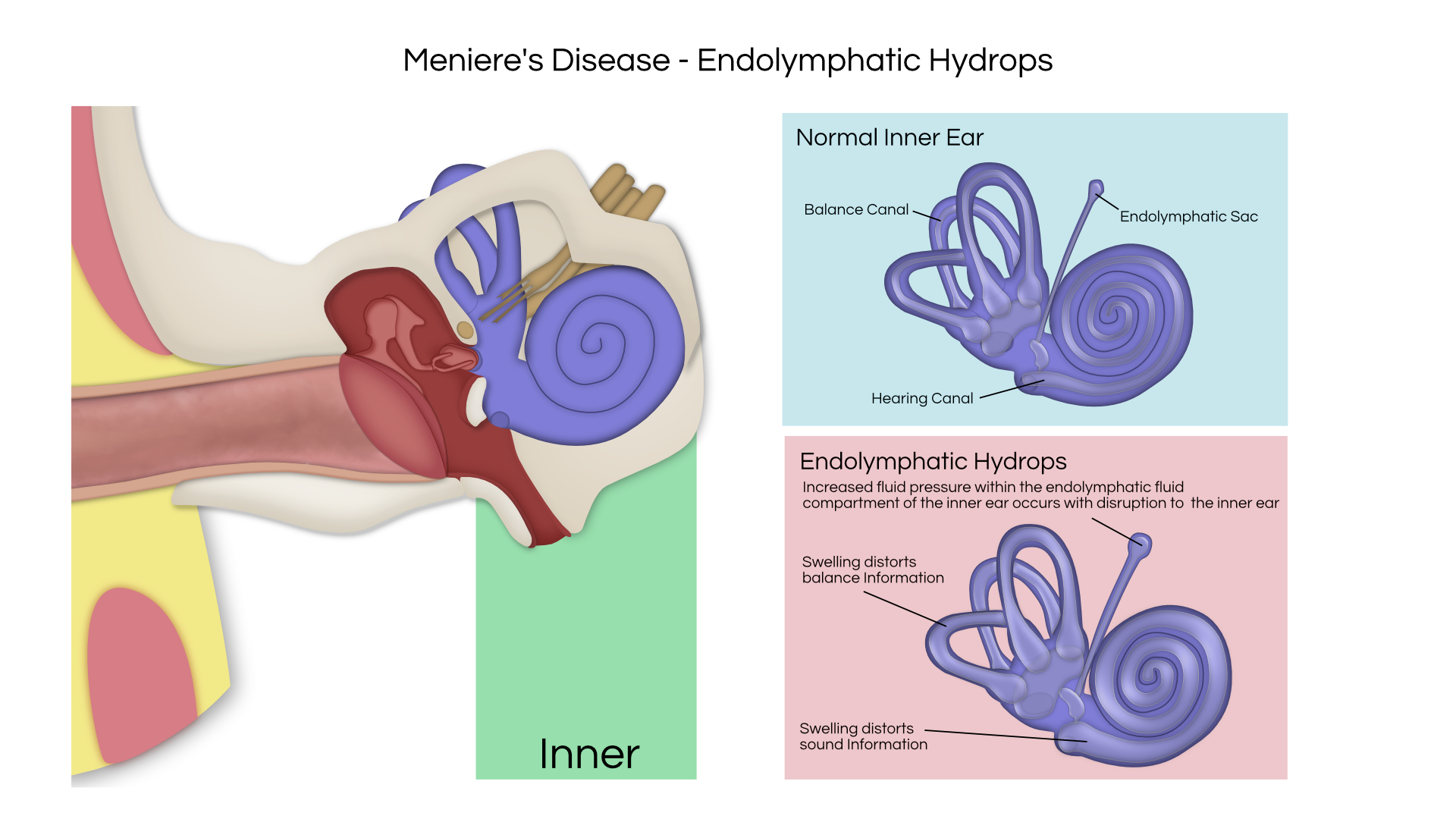 What is Meniere’s disease?

Prosper Meniere was a French Physician who described a new disease process in the mid-1800’s. The disease he identified consisted of four symptoms: attacks of vertigo, ear fullness or pressure, low-pitch tinnitus (ringing), and fluctuations in hearing. At the time, the cause of the ailment was unknown, but Meniere believed that it originated within the ear. Since that time much has been learned about the disease and its treatment; interestingly, however, we still do not know the cause of the disease Meniere described. There are now known to be multiple variants of this disease process, with similar pathologic consequences (abnormal tissue changes). Some forms affect only hearing, others only balance, and still others have a few, but not all, of the classic four symptoms. The classic four symptoms of Meniere’s disease are: severe vertigo with imbalance, fluctuating hearing loss, tinnitus, and ear pressure sensation.

It has been well characterized since the 1930’s, that all forms of Meniere’s disease involve enlargement of the scala media portion of the inner ear due to elevated fluid pressure, causing bulging of the surrounding reissner’s membrane. Eventually, the membrane ruptures with mixing of endolymph and perilymph (inner ear fluids), causing injury to the hair cells and producing the characteristic symptoms. This process is called “endolymphatic hydrops”, meaning too much endolymph. Only the classic symptom complex described by Meniere himself should be referred to as Meniere’s disease, whereas all the other forms are more properly termed “hydrops”, or “endolymphatic hydrops”. The precise cause of the excessive fluid is unknown and whether it is due to an overproduction of endolymph or an under-resorption is debated. Either way, the net result is too much endolymph with distressing symptoms. Although the etiology (cause) of “Meniere’s disease” is unknown, there are many known triggers of endolymphatic hydrops. These include allergy, immune mediated, metabolic disorders, infections (syphilis), congenital malformations of the ear, and trauma. The known causes occur infrequently compared to the idiopathic form (unknown cause), but a search is often undertaken.

The discussion you have with your Ear Institute of Texas physician is the most important aspect of making the diagnosis. The vertigo spells are classically episodic, not occurring more than once a day, and often separated by days, weeks, or even years. Vertigo (sensation of motion) in hydropic attacks can occasionally be heralded by ear fullness, an increase in ringing (tinnitus), or a sudden drop in hearing. Rarely, an improvement in hearing precedes the attack (Lermoyez syndrome). The attack typically lasts anywhere from 20 minutes to an entire day, depending on how long it takes for Reissner’s membrane to repair itself. The vertigo is typically described as a spinning sensation (either the environment or the individual is perceived as spinning), which is quite disabling, and often associated with severe nausea and vomiting, sweating, and occasionally loss of bowel and/or blander control. They are not associated with severe headaches. The Tumarkin variant of hydrops has sudden loss of postural control with “drop attacks”, and is thought to be due to involvement of the otolithic component of the inner ear. After an attack of vertigo, one may experience a period of unsteadiness lasting for hours to weeks (occasionally years) as the brain compensates for the loss of balance function.

Hearing loss in hydrops is quite variable, ranging from a sudden, severe loss without return of function, to a gradual decline over months to years. The most typical pattern is that of hearing fluctuations, with periods of good and poor hearing, associated with a gradual decline in word recognition. The classic form of Meniere’s disease consists of a low frequency loss during an attack that may (or may not) return to normal afterwards. Essentially, any pattern of hearing loss may be associated with hydrops; therefore, the audiometric pattern can not be solely relied upon to make the diagnosis. A demonstrable fluctuation in hearing in one ear or the other helps to make the diagnosis of hydrops.

Classically, low-pitched roaring sound is heard in the affected ear prior to, or during, an attack of vertigo. This too is highly variable, and some individuals may experience constant ringing (tinnitus) in the ear. The precise etiology of the tinnitus is poorly understood, but thought to arise from a loss of usually spontaneous activity of the cochlear hair cells. A sensation of fullness or pressure in the ear may accompany the vertigo attack as well. This is thought to arise from over-distension of the endolymphatic compartment with injury to the hair cells.

Not unusually, patients with hydrops are quite sensitive to changes in barometric pressure and may experience more attacks in the spring and fall. Hormonal changes that occur during menses and pregnancy may trigger an attack. Tension, stress, anxiety, allergy, and exhaustion are also known triggers of an attack.

A long list of disease processes must be excluded prior to making the diagnosis of hydrops or Meniere’s disease. Tests of hearing, balance, and occasionally imaging are often performed. Pure tone and speech audiometry, as well as electrocochleography (ECoG), are routinely performed at the Ear Institute of Texas. The former is a standardized hearing test, while the latter is a more specific test of inner ear fluid balance. Balance and vestibular function testing are also completed. When the diagnosis of hydrops is entertained, an ABR, or MRI/CT scan (imaging studies) is sometimes performed to ensure that the symptoms are not being caused by a tumor. It has been shown that nearly 1 patient in 10 with a tumor on the balance nerve will demonstrate “classic Meniere’s symptoms.” This does not mean that 1 out of 10 people with hydrops has a tumor, as these tumors are exceptionally rare, yet it remains an integral part of the diagnostic workup.

Once a diagnosis of Meniere’s disease is established, non-surgical treatments are attempted as first-line therapy to control the vertigo and other symptoms. Lifestyle modifications are recommended, including a low salt diet, reduction/avoidance of caffeine and alcohol, and control of stress. Medications such as a diuretic (water pill) may be prescribed to eliminate excess fluid. Since Meniere’s disease can be precipitated by environmental and food allergies, allergy testing and treatment are often recommended and performed at the Ear Institute of Texas. While medications can be given during times of disabling vertigo episodes (e.g. Meclizine/Antivert, Phenergan, and Valium), it is best to otherwise avoid vertigo suppressant medications since they can delay overall recovery. Vestibular rehabilitation by a specially trained therapist has been proven to be extremely useful in speeding recovery and improving balance, and is frequently prescribed by the Ear Institute of Texas physicians.

Meniere’s disease is a prominent cause of recurrent dizziness attributed to the inner ear. For those patients who suffer from the disease, the symptoms can be life altering and dramatically affect ones ability to function in normal daily living. The treatment of Meniere’s disease has evolved over many years. New minimally invasive techniques utilizing the use of endoscopes and/or lasers have become available that are generally well tolerated and even allow the patient to self-treat the inner ear under the direction of the neurotologic physician.

Often, the balance system has been permanently damaged by the vertigo attacks from Meniere’s. This creates a chronic sensation of imbalance or lightheadedness. Vestibular rehabilitation therapy has been proven to be highly effective in relieving these symptoms by improving the central balance system (within the brain). A specific program is designed to improve the weaknesses of your balance system, which may include problems with vision, proprioception, and vestibular input. Vestibular rehabilitation therapy is often combined with other therapeutic modalities such as medications, allergy immunotherapy, or surgery.

Hydrops is a chronic disease, like diabetes or hypertension. It needs to be treated medically (low sodium diet and diuretic) like other disease processes for many years. Like other disease states, it is can often be well controlled with medical therapies. This fact needs to be taken into account when surgical options are entertained. Certain individuals with hydrops will develop the disease in the opposite ear, which occurs in 5-30% of patients with hydrops. If an individual has had Meniere’s disease in one ear for three or more years, without symptoms in the other ear, the likelihood of getting dizziness in the other ear is quite rare. The vertigo associated with hydrops can burn out over time (usually a several year period). Your Ear Institute of Texas physician will do everything possible to allow you to live free of Meniere’s symptoms.

The Ear Institute of Texas
Based on 472 Google reviews.