What is the eustachian tube?

The eustachian tube functions as a pressure equalizing valve for the middle ear, which is normally filled with air. Under normal circumstances, the eustachian tube opens for a fraction of a second in response to swallowing or yawning. In so doing, it allows air into the middle ear to replace air that has been absorbed by the middle ear lining (mucous membrane), or to equalize pressure changes occurring with altitude changes. Anything that interferes with this periodic opening and closing of the eustachian tube may result in a hearing impairment or other ear symptoms.

Obstruction or blockage of the eustachian tube results in a vacuum in the middle ear (negative middle ear pressure), with resultant retraction (sucking in) of the eardrum. In an adult, this is usually accompanied by some discomfort, such as a fullness or pressure feeling, and may result in a mild hearing impairment and head noise (tinnitus). In children, there may be no symptoms. If the obstruction is prolonged, fluid may be sucked into the middle ear from the lining mucous membranes. If the fluid is unable to drain into the throat due to obstruction of the eustachian tube, a condition called serous otitis media (fluid in the middle ear) may develop. Serous otitis media is very common in young children due to immaturity of the eustachian tube, but can also occur in older children and adults. It occurs frequently in connection with upper respiratory infections or allergies. The limitation of mobility of the eardrum due to the presence of a vacuum or fluid in the middle ear accounts for the hearing impairment associated with eustachian tube dysfunction.

There are many alternatives to treat a poorly functioning eustachian tube. 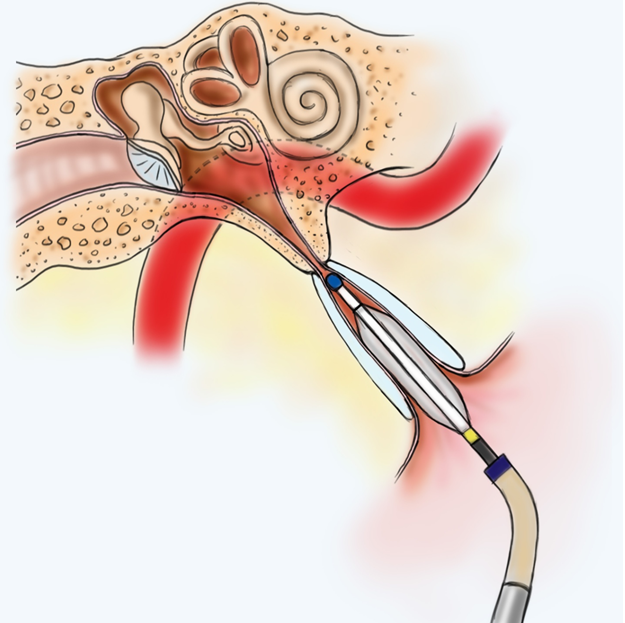 Individuals with an eustachian tube problem may experience difficulty equalizing middle ear pressure when flying. When an aircraft ascends, the atmospheric pressure decreases. This results in a relative increase in the middle ear air pressure compared to the surrounding cabin pressure. When the aircraft descends, just the opposite occurs: atmospheric pressure increases in the cabin of the aircraft, and there is a relative decrease in the middle ear pressure compared to the surrounding cabin pressure. Either situation may result in discomfort in the ear due to pressure and stretching of the eardrum, when the eustachian tube is not functioning properly to equalize the pressure between middle ear and cabin pressure. Usually, this discomfort is experienced during descent of the aircraft. To avoid middle ear problems associated with flying, you should not fly if you have an acute upper respiratory problem such as a common cold, allergy attack, or sinus infection.

Should you have such a problem, or a history of chronic eustachian tube problems, and must fly, you may help avoid ear difficulty by observing the following recommendations (if your physician agrees you can tolerate this therapy):

***None of these recommendations or precautions need to be followed if you have a tube in your eardrum.

The Ear Institute of Texas
Based on 472 Google reviews