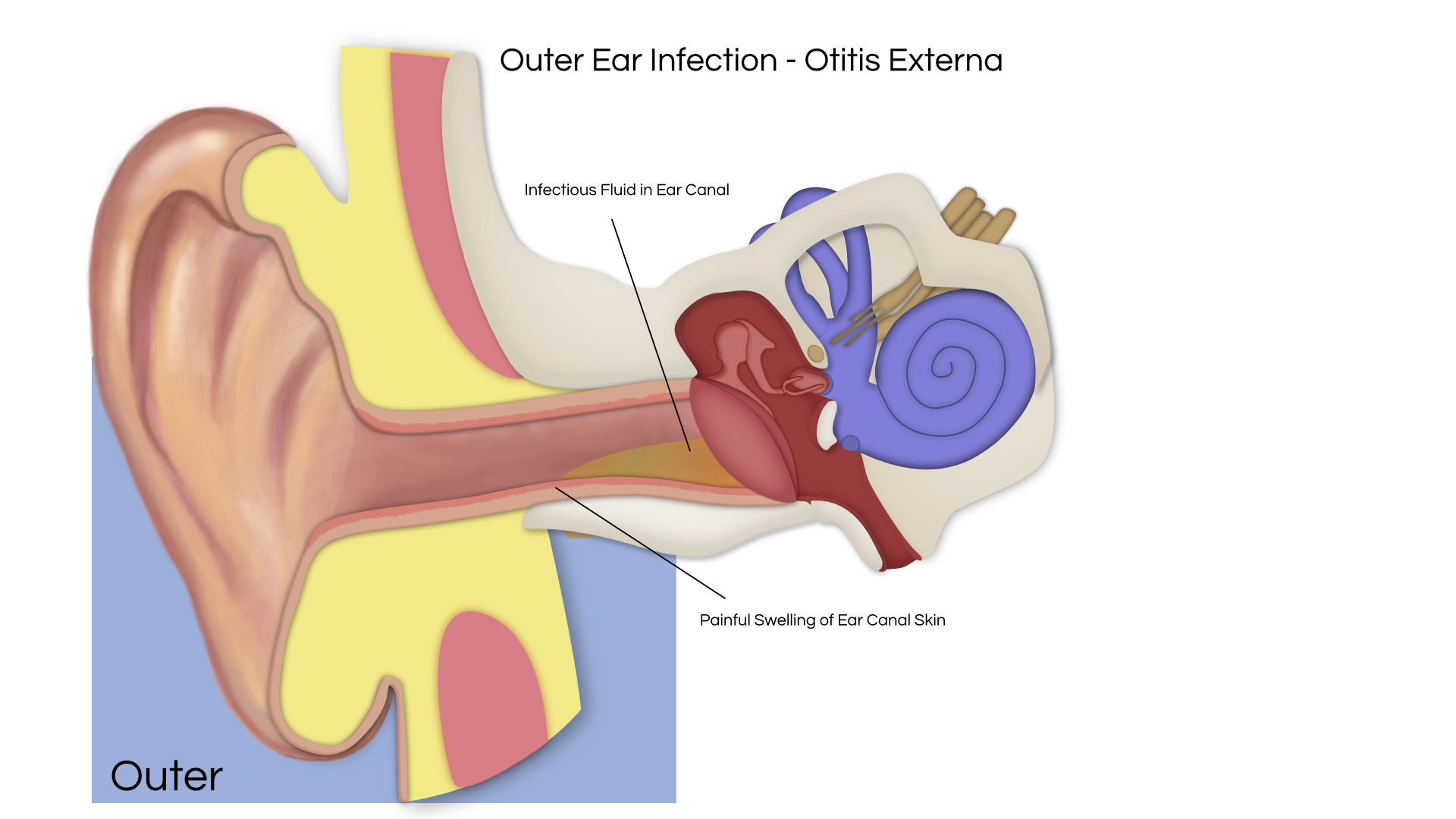 Otitis Externa refers to an infection of the ear canal. The most common symptom of otitis externa is pain in the affected ear. Other symptoms can include hearing loss, pressure in the ear, drainage from the ear, and itching.

Otitis externa is most commonly caused by a bacterium called pseudomonas. Pseudomonas is often found in fresh water including lakes, swimming pools, and occasionally in bath water. This is why Otitis externa is often referred to as “swimmer’s ear.” Occasionally, Otitis externa may be caused by fungi (similar to athlete’s foot). It is often difficult to distinguish between otitis externa and otitis media, which is an infection that occurs behind the eardrum in the middle ear. A visit to your physician is often necessary to make the diagnosis and start the appropriate medicines. Otitis externa is usually cured within several days after starting the use of antibiotic or anti-fungal containing ear drops. Your doctor will likely advise you to keep your ears dry until the symptoms completely subside. 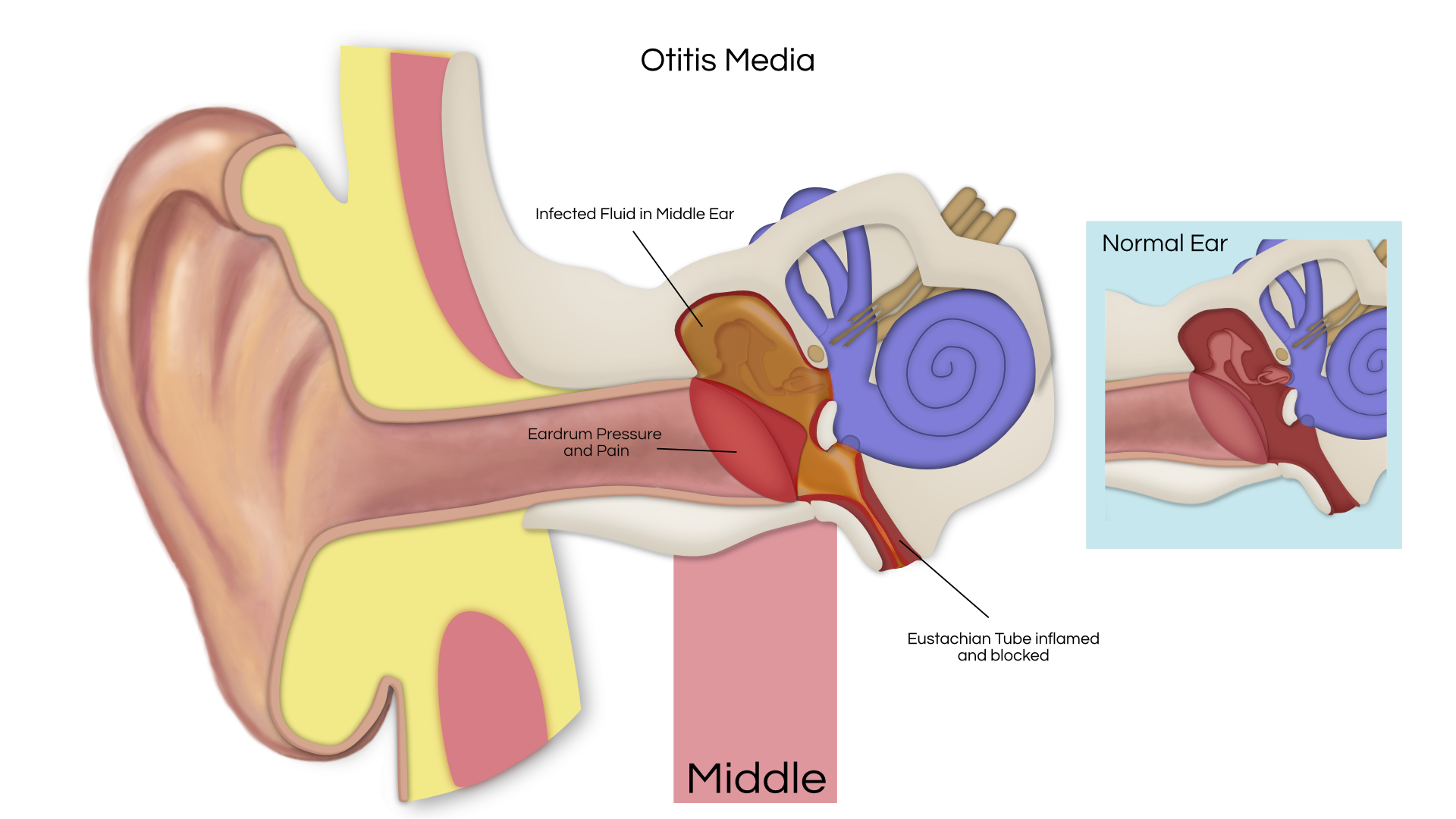 Otitis Media: Is it serious?

Yes, it is serious because of the earache and hearing loss it can create. Hearing loss, especially in children, may impair learning capacity and even delay speech development. However, if it is treated promptly and effectively, hearing can almost always be restored to normal.

Otitis media is also serious because the infection can spread to nearby structures in the head, especially the mastoid. Thus, it is very important to recognize the symptoms (see list below) of otitis media and to get immediate attention from your doctor.

Blockage of the eustachian tube during a cold, allergy, or upper respiratory infection and the presence of bacteria or viruses lead to the accumulation of fluid ( pus, mucus or thin serous fluid) behind the eardrum. This is the infection called acute otitis media. The build-up of pressurized pus in the middle ear causes earache, swelling and redness. Since the eardrum cannot vibrate properly, you (or your child) may have hearing problems.

Sometimes the eardrum ruptures and pus drains out of the ear. More commonly, the pus, mucus or serous fluid remains in the middle ear due to the swollen and inflamed Eustachian tube. This is called a middle ear effusion or serous otitis media. Often after the acute infection has passed, the effusion remains and becomes chronic, lasting for weeks, months or even years. This condition makes one subject to frequent recurrences of the acute infection and may cause difficulty in hearing.

In infants and toddlers, look for:

Pulling or scratching at the ear, especially if accompanied by the following:

In older children, adolescents and adults, look for:

***Remember, without proper treatment, damage from an ear infection can cause chronic or permanent hearing loss.

An audiogram tests if hearing loss has occurred by presenting tones at various pitches. A tympanogram measures the air pressure in the middle ear to see how well the eustachian tube is working and how well the eardrum can move.

The doctor may prescribe one or more medications. It is important that all the medication(s) be taken as directed and that any follow-up visits be kept. Often, antibiotics to fight the infection will make the earache go away rapidly, but the infection may need more time to clear up. Thus, be sure that the medication is taken for the full time your doctor has indicated. Other medications that your doctor may prescribe include an antihistamine (for allergies), a decongestant (especially with a cold), nasal steroid sprays (to decrease inflammation), as a combination.

Sometimes the doctor may recommend a medication to reduce fever and/or pain. Analgesic ear drops can ease the pain of an earache. Call your doctor if you have any questions about you or your child’s medication or if symptoms do not clear.

Most of the time, otitis media clears up with proper medication. In many cases, however, further treatment may be recommended by your physician. An operation, called a myringotomy may be recommended. This involves a small surgical incision (opening) into the eardrum to promote drainage of fluid and to relieve pain. The incision heals within a few days with practically no scarring or injury to the eardrum. In fact, the surgical opening can heal so fast that it often closes before the infection and the fluid are gone. A ventilation tube can be placed in the incision, preventing fluid accumulation and thus improving hearing.

The surgeon selects a ventilation tube for your child that will remain in place long enough for the middle ear infection to improve and to attempt to allow the Eustachian tube to return to normal. This may require several weeks or months. During this time, you must keep water out of the ears because it could start an infection. Otherwise, the tube causes no trouble, and you will probably notice a remarkable improvement in hearing and a decrease in the frequency of ear infections.

Otitis media may recur as a result of chronically infected adenoids . If this becomes a problem, your doctor may recommend their removal. This can be done at the same time as ventilation tubes are inserted.

Allergies may also require treatment. Our office is able to provide both allergy testing and allergy treatment.

So remember, otitis media is generally not serious if it is promptly and properly treated. With the help of your physician, you and/or your child can usually feel and hear better quickly.

Be sure to follow the treatment plan and see your physician until he/she tells you that the condition is fully cured.

The Ear Institute of Texas
Based on 472 Google reviews